What I’m about to tell you will change your life, forever.

In my job, I help people overcome some of life’s greatest challenges. When I was a medical student, fuelled by my strong sense of idealism and too many episodes of ER, I thought those challenges would be thumping on someone’s chest to save them from the clutches of death, or removing a gangrenous appendix with just a butter knife and some twine, or delivering a baby whilst upside down in some plane wreckage. You know, something heroic.

But from my first day as an intern, I learnt something … nothing is as life changing as a good poo.

Sure, talking to people about their time on the porcelain throne isn’t particularly glamorous but the daily download, exorcising a demon, pressing towards the bowl … it’s vital. Not enjoying a regular Trump dump leads to stagnation in the literal and economic sense – chronic constipation costs the US over $18 billion dollars in additional health care costs, not to mention lost productivity.

So how does one regularly clean the pipes to ensure the health of our bowels and our budgets? Well, we’ve all heard that “fibre is your friend”, and that remains true, though most people don’t realise that fibre works better when you drink lots of water with it. So more veggies, and more water.

Though the main push of this particular post is a look at the production side of the Captain’s log. This was inspired by a blog I came across as I click-grazed across the internet the other night – http://www.evidentlycochrane.net/feet-up-constipation/

But, ok, the author of the blog does have a point – sitting with our hips flexed naturally reduces the otherwise convoluted path of our sigmoid colon to an efficiently straight rectal super-highway. One way to do that is to squat, but if you’re old, inflexible, or like me, no longer have a great sense of balance (or you’re trying to defecate whilst drunk) then squatting is probably not a good idea – you and your poo are likely to end up on the floor.

The alternative is the ‘crash position’, leaning forward slightly with your elbows on your thighs and putting your feet up on a small stool (the ‘stool stool’ and she called it!).

The other thing to do, although perhaps not in a public toilet or at a dinner party, is to moo. As the author said: “Leaning on the elbows and making a “moo” (or other) sound reduces the urge to strain” … Well, it works for cows I guess.

So, the bottom line: you need to lift your shoe and moo on the loo to poo. 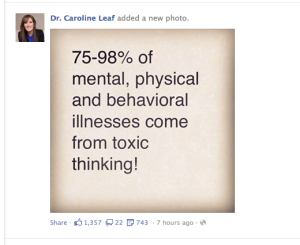 Dr Caroline Leaf believes that nearly all our diseases come from our thoughts.

In the hustle and bustle of daily life, most people wouldn’t stop to consider what makes people sick.  In my profession, I get a front row seat.

In the average week, I get to see a number of different things.  Mostly “coughs, colds and sore holes” as the saying goes, although there are some rarer things too.  And sometimes, people present with problems that aren’t for the faint of heart (or stomach – beware of nail guns is all I can say).

Normally, the statistics of who comes in with what doesn’t make it beyond the desk of the academic or health bureaucrat.  The numbers aren’t as important as the people they represent.

But to Dr Caroline Leaf, Communication Pathologist and self-titled Cognitive Neuroscientist, the numbers are all important.  To support her theory of toxic thoughts, Dr Leaf has stated that “75 to 98% of mental and physical (and behavioural) illness comes from one’s thought life” [1: p37-38].  She has repeated that statement on her website, on Facebook, and at seminars.

As someone with a front row seat to the illnesses people have, I found such a statement perplexing.  In the average week, I don’t see anywhere near that number.  In general practices around Australia, the number of presentations for psychological illnesses is only about eight percent [2].

But Australian general practice is a small portion of medicine compared to the world’s total health burden.  Perhaps the global picture might be different?  The World Health Organization, the global authority on global health, published statistics in November 2013 on the global DALY statistics [3] (a DALY is a Disability Adjusted Life Year).  According to the WHO, all Mental and Behavioural Disorders accounted for only 7.2% of the global disease burden.

You don’t need a statistics degree to know that seven percent is a long way from seventy-five percent (and even further from 98%).

Perhaps a large portion of the other ninety-three percent of disease that was classified as physical disease was really caused by toxic thoughts?  Is that possible?  In short: No.

When considered in the global and historical context, the vast majority of illness is related to preventable diseases that are so rare in the modern western world because of generations of high quality public health and medical care.

In a recent peer-reviewed publication, Mara et al state, “At any given time close to half of the urban populations of Africa, Asia, and Latin America have a disease associated with poor sanitation, hygiene, and water.” [4] Bartram and Cairncross write that “While rarely discussed alongside the ‘big three’ attention-seekers of the international public health community—HIV/AIDS, tuberculosis, and malaria—one disease alone kills more young children each year than all three combined. It is diarrhoea, and the key to its control is hygiene, sanitation, and water.” [5] Hunter et al state that, “diarrhoeal disease is the second most common contributor to the disease burden in developing countries (as measured by disability-adjusted life years (DALYs)), and poor-quality drinking water is an important risk factor for diarrhoea.” [6]

Diarrhoeal disease in the developing world – the second most common contributor to disease in these countries, afflicting half of their population – has nothing to do with thought.  It’s related to the provision of toilets and clean running water.

We live in a society that prevents half of our illnesses because of internal plumbing.  Thoughts seem to significantly contribute to disease because most of our potential illness is prevented by our clean water and sewerage systems.  Remove those factors and thought would no longer appear to be so significant.

In the same manner, modern medicine has become so good at preventing diseases that thought may seem to be a major contributor, when in actual fact, most of the work in keeping us all alive has nothing to do with our own thought processes.  Like sanitation and clean water, the population wide practices of vaccination, and health screening such as pap smears, have also significantly reduced the impact of preventable disease.

Around the world, “Recent estimates of the global incidence of disease suggest that communicable diseases account for approximately 19% of global deaths” and that “2.5 million deaths of children annually (are) from vaccine-preventable diseases.” [7] Again, that’s a lot of deaths that are not related to thought life.

Since 1932, vaccinations in Australia have reduced the death rate from vaccine-preventable diseases by 99% [8].  Epidemiological evidence shows that when vaccine rates increase, sickness from communicable diseases decrease [9: Fig 2, p52 & Fig 8, p67].

And around the world, the other major cause of preventable death is death in childbirth.  The risk of a woman dying in childbirth is a staggering one in six for countries like Afghanistan [11] which is the same as your odds playing Russian Roulette.  That’s compared to a maternal death rate of one in 30,000 in countries like Sweden.  The marked disparity is not related to the thought life of Afghani women in labour.  Countries that have a low maternal death rate all have professional midwifery care at birth.  Further improvements occur because of better access to hospital care, use of antibiotics, better surgical techniques, and universal access to the health system [11].  Again, unless one’s thought life directly changes the odds of a midwife appearing to help you deliver your baby, toxic thoughts are irrelevant as a cause of illness and death.

Unfortunately for Dr Leaf, her statement that “75 to 98 percent of mental, physical and behavioural illnesses come from toxic thoughts” is a myth, a gross exaggeration of the association of stress and illness.

In the global and historical context of human health, the majority of illness is caused by infectious disease, driven by a lack of infrastructure, public health programs and nursing and medical care.  To us in the wealthy, resource-rich western world, it may seem that our thought life has a significant effect on our health.  That’s only because we have midwives, hospitals, public health programs and internal plumbing, which stop the majority of death and disease before they have a chance to start.

Don’t worry about toxic thoughts.  Just be grateful for midwives and toilets.

9.         Immunise Australia, Myths and Realities. Responding to arguments against vaccination, A guide for providers. 5th ed. 2013, Commonwealth of Australia, Department of Health and Ageing, Canberra: