Earlier this week, the prestigious medical journal The Lancet published an article about the health effects of obesity [1].

That sounds a lot like old news.  Why is a leading medical journal wasting space printing studies that tell us what we already know?  Well, up until now, the answer wasn’t as settled as people might have thought.

From the earliest writings of the ancient Greeks, fat people were always considered weak-willed or morally lacking.  Obese people either over-indulged or were lazy sods that deserved the indignation of the clearly morally superior skinny people.  Medical science initially seemed to back up that notion with hard data.  Body Mass Index (or BMI, your weight in kilograms divided by your height in metres squared) between 20 and 25 was the ultimate goal, and if you were above that, you were set to live a shorter and unhappier life.

Then a few years ago, a few studies came out showing that being overweight wasn’t as dire as people thought, and in fact, some studies showed that being overweight and mildly obese offered a small survival advantage over a weight in the “normal” range [2].  This was known as the obesity paradox.

So questions hung in the air like the sickly sweet smell of freshly baked donuts – Did the medical community get obesity wrong?  Were we meant to be cuddly instead of bony?  Were the lard nazi’s tricking us into lifestyles of kale and sit ups under false pretences?

The study by the objectively named Global BMI Mortality Collaboration seems to have definitively answered those questions.  The Global BMI Mortality Collaboration was a collective effort of more than 500 researchers from more than 32 countries, who pooled the resources of 239 different studies involving more than 10 million adults.  The collaborators weeded out more than 6 million people to form a group of 3,951,455 people who had never smoked and had not been diagnosed with a chronic disease before being recruited, and who had survived for more than 5 years after being recruited.  This made their group of participants in this study as statistically robust as possible.  These participants were followed for about 14 years.  Overall, 385,879 of them died.  To see whether obesity had an impact on mortality, they adjusted the raw numbers for age and gender, and calculated the likelihood of a participant dying depending in their BMI.

It isn’t good news for those of us who are of ample proportion.  Compared to those in the healthiest weight range, the most obese had a two-and-half times greater risk of dying from any cause.  Those who were overweight but not obese, which the previous studies suggested may have been ok, had an increased risk of dying too, but only by about 7%.  Obese males had a higher risk of dying than obese females, and obesity was worse for you if you were obese and young rather than obese and old.  Though before all the skinny people start skiting, those with a BMI of under 20 also had a higher mortality.  The best place to be was with a BMI of 20-25.

Statistically speaking, this is a really strong study, so the conclusions it draws are hard to argue with.  It confirms that the BMI of 20-25 is the ideal weight, and that either extreme of body weight is certainly undesirable.

There are a couple of things to note.  Firstly, being overweight still isn’t that bad.  Sure, it’s not ideal like the older studies may have said, but a 7% increase in all-cause mortality isn’t going to particularly cut your life short.  So don’t panic about your love handles just yet.

Secondly, despite the statistical power of this study, it really only answers the single question: Is obesity related to mortality?  It answers it, and it answers it conclusively, but it doesn’t tell us how or why obesity and mortality are related, which are more important questions overall.

Because while it’s necessary to know that obesity, illness and death are related, knowing how they are related can then help us understand the why of obesity, which will then help doctors give patients real information that they can use.

For example, the Lancet study didn’t look at causation.  Is it that obesity causes chronic diseases which then cause early mortality like is the case with smoking?  Or is it that there’s another cause underlying both obesity and chronic disease, with obesity being unfairly framed in a guilt-by-association way? 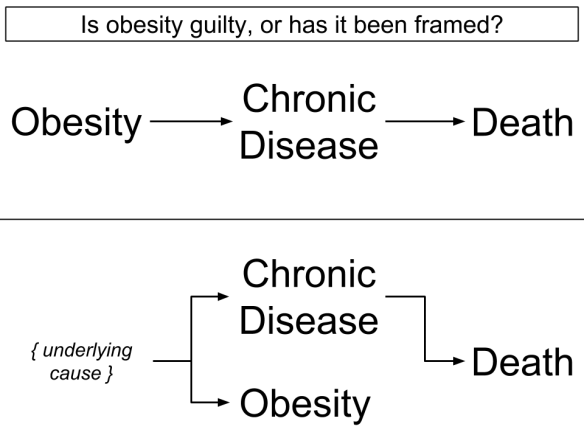 What about mitigating factors?  If you’re fat but you’re also very fit, what’s your mortality then?  If you have a gastric bypass or a gastric sleeve and you shed a hundred pounds, does your mortality improve?  I’ll try and answer some of these question in future blogs.

Like all good research, this study in The Lancet seems to have generated more questions than answers.  What’s certain is that more research needs to be done.

If you are obese and you are concerned about your health, then talk to your GP or dietician.  Be sensible with your health.  Sure, obesity isn’t great, but you can sometimes do as much damage to yourself through poorly designed weight loss programs than you can with a dozen donuts.