ADHD is always a popular topic … and an apoplexic topic. Any mention of ADHD seems to induce everyone within ear-shot to uncontrollably expectorate their half-baked opinion on the subject, like the Tourette’s syndrome of ignorance.

I’ve heard them all over the years …

I could go on, but if I do, I’m just going to get myself in a tizz.

ADHD is the new AIDS. There is so much misinformation and discrimination surrounding ADHD in our modern enlightened society that the stigma is worse than the actual illness, which really says something about how badly ADHD is treated in our communities.

In order to counter the prevalent ignorance of ADHD, even just a little, I want to give a crash course on the science so that at least somewhere on the searchable web, there is a counterbalance to the thousands of misinformed arm-chair ‘experts’ whose only experience with ADHD is reading the misguided perspectives of other so-called ‘experts’.

The current formal definition that must be matched to have a diagnosis of ADHD is:

In addition, the following conditions must be met:
– Several inattentive or hyperactive-impulsive symptoms were present before age 12 years.
– Several symptoms are present in two or more setting, (e.g., at home, school or work; with friends or relatives; in other activities).
– There is clear evidence that the symptoms interfere with, or reduce the quality of, social, school, or work functioning.
– The symptoms do not happen only during the course of schizophrenia or another psychotic disorder.
– The symptoms are not better explained by another mental disorder (e.g. Mood Disorder, Anxiety Disorder, Dissociative Disorder, or a Personality Disorder.
(http://www.cdc.gov/ncbddd/adhd/diagnosis.html)

In Australia, ADHD cannot be formally diagnosed by anyone other than a paediatrician or a psychiatrist. So even as an experienced GP, I can’t officially diagnose it. The school counsellor or local naturopath can’t diagnose it. You can’t just pluck it out of the air. The diagnosis can only come from a medical specialist with at least a decade of university level training.

The official prevalence rate of ADHD (the number of people with a current diagnosis) is only 5%. According to some US based community surveys, nearly a half of those children are not on medication for it (http://www.cdc.gov/ncbddd/adhd/data.html). So much for Ritalin being overprescribed. 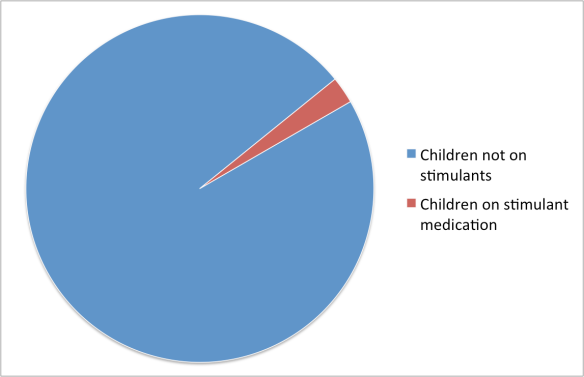 ADHD is a predominantly genetic disorder which leads to specific structural deficiencies in the brain. Children with ADHD have a significant global reduction in the volume of grey matter, most prominently in a part of the brain called the right lentiform nucleus. These changes usually improve with age and improve with stimulant medication. There is also evidence of changes to the shape and size of other brain structures such as the amygdala and the thalamus (areas of the brain integral to sensory and emotional processing). Early evidence also exists which suggests changes in the white matter pathways connecting a number of critical brain regions. Studies investigating brain development have estimated that the frontal lobe development of ADHD children lags that of normal children by an average of about three years.

Modern functional imaging techniques show that the brains of children with ADHD have abnormally low functioning in most of the brain structures related to attention and planning (numerous areas of the frontal cortex as well as the basal ganglia, thalamus and parietal cortices). At the same time, there is extra activity in portions of the brain related to the Default Mode Network (the day-dreaming part of your brain). So children with ADHD have brains in which the ‘day-dreaming’ network activity persists into, or emerges during, periods of task-related activity. This takes processing power away from the competing task-specific processing causing a deficit in performance. Studies show that Ritalin normalises this dysfunction.

The best evidence suggests that dopamine is the main neurotransmitter involved in ADHD. Other neurotransmitters are likely to be involved but the evidence is still being confirmed. Medications like Ritalin improve ADHD symptoms by increasing the amount of dopamine that the nerve cells have access to, improving the clarity of the signal between them.

Underlying all of these neural changes are genetics. While there have been no specific genes discovered in research thus far, twin studies have demonstrated a heritability of ADHD of up to 76%. The most significant environmental factors that are responsible for the remainder of the influence on ADHD are not nutritional factors such as sugar or food additives, but are low birth weight/prematurity and exposure to smoking during pregnancy.

Are there any better treatments for ADHD other than stimulants like Ritalin? Other non-stimulant medications are available although at this stage, Ritalin and Dexamphetamine still out-perform them. Cognitive therapies may mimic some of the brain changes of Ritalin but it is not clear whether the effectiveness of cognitive therapies are equal to or better than the stimulant medications. What is clear is that Ritalin doesn’t lead to a euphoric state (a “drug high”) when given orally. So children can not get addicted to Ritalin when used responsibly.

In summary, ADHD exists. It’s caused by the interaction of a number of genes and some environmental factors such as those related to prematurity, low birth weight and maternal smoking, which alter the growth and development of the brain, specifically the grey matter of the frontal cortex, the basal ganglia and thalamus, and the pathways which connect them. These structural changes cause the day-dreaming part of the brain to be more active and the attention and planning parts of the brain to be less active.

ADHD is not caused by food additives or sugar. There is no evidence that autoimmunity plays a significant part. Forcing your child to consume bone broth or stop eating gluten will not cure them.

ADHD is not caused by bad parenting. Ritalin is not evil. Medications like Ritalin and Dexamphetamine have been shown to improve the functioning of children with ADHD and improve their underlying neurological deficits.

It’s time to cut the crap. Our culture needs to stop victimising the child with ADHD and their parents, who already suffer enough from the ADHD without ignorant busy-bodies and self-titled experts chiming in and making their suffering even more pronounced. It’s time to stop judging those who choose the best for their child by medicating them, who do so in spite of the unfair and ill-informed criticism of everyone from their mother-in-law to the milkman when they do. It’s time to remove the stigma from one of the most common psychiatric disorders of childhood so that every child has an equal chance of growing into an adult that can realise their full potential.

That’s the truth about ADHD.

The Discovery of Aspie

Some of this century’s best discoveries were creative and determined efforts to answer “What if…?” questions. What if people could fly? What if electrical energy could be harnessed to produce light? What if there was an easily accessible, international communication and information network? The answers have resulted in permanent changes: air travel, light bulbs, the Internet. These discoveries have rendered their less effective counterparts to relative extinction from use: gone is the stagecoach, gas lighting, and multi-volume hardbound encyclopedias. These improvements remind us of our option and ability to experiment, re-mold, re-think, and imagine. In that spirit, this article submits a new question: What if Asperger’s Syndrome was defined by its strengths? What changes might occur?

Moving from diagnosis to discovery
Making any diagnosis requires attention to weaknesses, the observation and interpretation of signs and symptoms that vary from typical development or health. Certainly it would be a little disarming to visit a doctor for a diagnosis, only to have her inquire, “So, what feels absolutely great?” The DSM 5 (American Psychiatric Association, 2013) assists in the identification of a variety of disorders. It is used by psychiatrists and psychologists to match observed weaknesses, symptoms and behaviors to text. In DSM 5 Autism Spectrum Disorder, which includes Asperger’s Syndrome, is identified by specific diagnostic criteria, a constellation of observed social and communication characteristics. Once diagnosed, a child or adult with the diagnosis is referred to with politically correct “people first” terminology, i.e. a person with Autistic Spectrum Disorder.

Unlike diagnosis, the term discovery often refers to the identification of a persons strengths or talents. Actors are discovered. Artists and musicians are discovered. A great friend is discovered. These people are identified by an informal combination of evaluation and awe that ultimately concludes that this person – more than most others – possesses admirable qualities, abilities, and/or talents. It’s an acknowledgment that, “… you know, he’s better than me at …”. In referring to people with respect to their talents or abilities, politically correct “people first” terminology is not required; labels like musician, artist, or poet are welcomed and considered complimentary.

If Asperger’s syndrome was identified by observation of strengths and talents, it would no longer be in the DSM 5, nor would it be referred to as a syndrome. After all, a reference to someones special strengths or talents does not use terms with negative connotations (it’s artist and poet, not Artistically Arrogant or Poetically Preoccupied), nor does it attach someones proper name to the word syndrome (it’s vocalist or soloist, not Sinatra’s Syndrome).

New ways of thinking of thinking often lead to discoveries that consequently discard their outdated predecessors. It could result in typical people rethinking their responses and rescuing a missed opportunity to take advantage of the contributions of those with autism to culture and knowledge.

Discovery Criteria for Aspergers Syndrome, by Attwood and Gray

A. A qualitative advantage in social interaction, as manifested by a majority of the following:

1. peer relationships characterised by an absolute loyalty and impeccable dependability
2. free of sexist, “age-ist”, or cultural biases; ability to regard others at “face value”
3. speaking one’s mind irrespective of social context or adherence to personal beliefs
4. ability to personal theory or perspective despite conflicting evidence
5. seeking an audience or friends capable of: enthusiasm for unique interests and topics; consideration of details; spending time discussing a topic that may not be of primary interest to others
6. listening without continual judgement or assumption
7. Interested primarily in significant contributions to conversation; preferring to avoid “ritualistic small talk” or socially trivial statements and superficial conversation
8. seeking sincere, positive, genuine friends with an unassuming sense of humour.

B. Fluent in autism, a social language characterised by at least three of the following:

1. a determination to seek the truth
2. conversation free of hidden meaning or agenda
3. advanced vocabulary and interest in words
4, fascination with word-based humour, such as puns
5. advanced use of pictorial metaphor

C. Cognitive skills characterised by at least four of the following:

1. strong preference for detail
2. original, often unique perspective in problem solving
3. exceptional memory and/or recall of details often forgotten or disregarded by others, for example: names, dates, schedules, routines
4. avid perseverance in gathering and cataloguing information on a topic of interest
5. persistence of thought
6. encyclopaedic or digital knowledge of one or more topics
7. knowledge of routines and a focused desire to maintain order, consistency and accuracy
8. clarity of values/decision making unaltered by political or financial factors

1. acute sensitivity to specific sensory experiences and stimuli, for example: hearing, touch, vision, and/or smell
2. strength in individual sports and games, particularly those involving endurance, visual accuracy or intellect, including rowing, swimming, bowling or chess
3. “social unsung hero” with trusting optimism: frequent victim of social weakness and prejudices other others, while steadfast in the belief of the possibility of genuine friendship
4. increased probability over general population of attending university after high school
5. often take care of others outside the range of typical development

Perhaps we have discovered the next stage of human evolution?