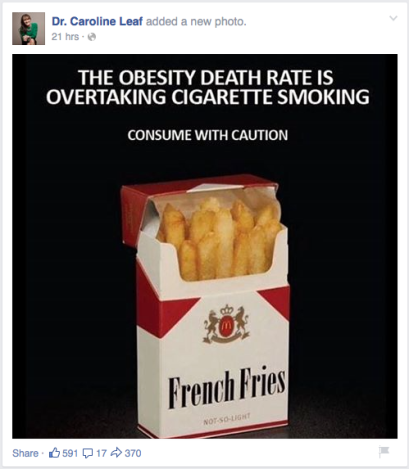 Caroline Leaf is on the nutritional warpath.

Our society isn’t the best when it comes to eating right. Fast food and junk food are more attractive options than fresh food, and nearly everyone knows it. Today, the internet is flooded with celebrity chefs and self-titled experts attempting to leverage some profit by advocating their own brand of diet or herb as the simple solution to what is a deceptively complex problem.

Dr Caroline Leaf is a communication pathologist and self-titled cognitive neuroscientist. In recent times she has also jumped on to the nutritional bandwagon, advocating organic gluten free recipes through food-selfies, and reposting Jamie Oliver quotes.

Today’s meme follows a similar line, where she has reposted an image which fits with her personal cognitive bias – a picture of french-fries in a cigarette packet, accompanied by the tag line, “THE OBESITY DEATH RATE IS OVERTAKING CIGARETTE SMOKING. Consume with caution”.

The image is a case study in overstatement. According to the most recent Global Burden of Disease data (currently 2010), the death rate associated with cigarette smoking is currently 91.4 per 100,000 population while the death rate associated with a high BMI is only 48.1 per 100,000 population. Even extrapolating the figures to the current year, the predicted rates would still be 89.1 vs 51.9 respectively, which are still a long way apart. On the current trends, obesity won’t overtake smoking as a global cause of death until 2055. So saying the obesity death rate is overtaking cigarette smoking is like saying that Christmas is coming – it’s technically true, but it’s still a long way off. 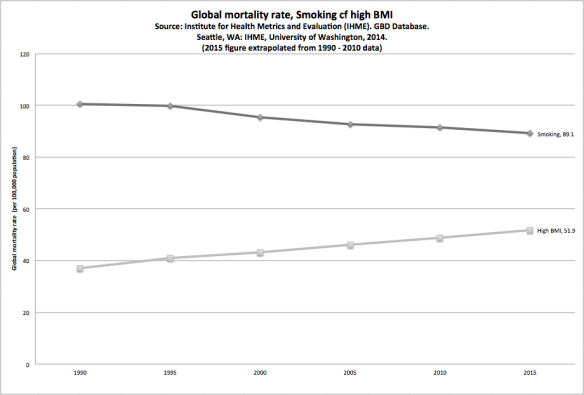 Of course, it’s no secret that more people, especially in the western world, are getting fatter. The old assumption was that obesity contributed to metabolic syndrome which then caused heart disease and type 2 diabetes and a concomitant rise in deaths. However, new evidence casts serious doubt over these assumptions.

In a meta-analysis of the association of mortality to BMI, Flegal, Kit, Orpana, and Graubard (2013) showed that overweight people have a slightly lower death rate than normal weight people, those with mild obesity have the same risk of death as normal weight people, and that the overall risk of all classes of obesity was small (relative risk 1.18 (95% CI, 1.12-1.25)). As a comparison, the risk of death from cigarette smoking is up to 2.66 (Shavelle, Paculdo, Strauss, & Kush, 2008)**.

So the key isn’t whether someone’s obese or not, the key is whether someone’s metabolically healthy or not (which is another blog for another time). According to the latest scientific evidence, the obesity death rate probably isn’t related to obesity after all.

Dr Leaf might be on the nutritional warpath with the right intentions, but her lack of expertise and willingness to fact-check is showing with every meme. If she wants to continue portraying herself as an expert in the area of food and nutrition, she needs to move away from her personal biases and start promoting proper science. 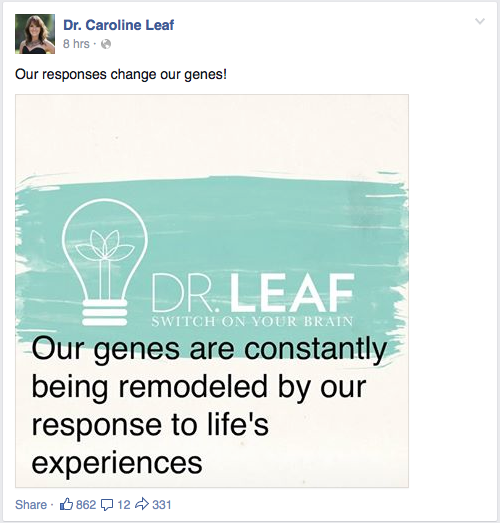 We are all slowly mutating!

Yep, it’s true. Not to the same extent as you might see in shows like X-Files or Dr Who, but still, our DNA is slowly accumulating permanent changes to the pattern of the genes that it contains. Thankfully, it’s only in science fiction that the mutations result in zombie apocalypse scenarios.

Dr Caroline Leaf is a Communication Pathologist and a self-titled cognitive neuroscientist. Still glowing from the unquestioning adulation of her faithful followers at the Switch On Your Brain conference last week, Dr Leaf has hit social media again. Most of her posts have been innocuous quotes that look borrowed from Pinterest, but today, Dr Leaf has ventured into the pseudoscientific again by claiming that, “Our genes are constantly being remodeled by our response to life’s experiences.”

Unless your response to life’s experiences is to stand next to an industrial microwave generator or live in a nuclear waste dump, Dr Leaf’s statement is pure fiction. Dr Leaf confuses the mutation of our genes with the expression of our genes.

The only way our genes actually change is through mutation. A mutation is a permanent change in the sequence of the DNA molecule. A genetic mutation is a permanent change in the DNA sequence that encodes a gene. DNA is constantly mutating, because of environmental damage, chemical degradation, genome instability and errors in DNA copying or repair [1: p97]. Still, the actual rate of DNA mutation is about 1 in 30 million base pairs [2]. So DNA is very stable, and changes for a number of reasons, only some of which are related to our external environment. And as I alluded to just before, slightly tongue-in-cheek, our responses are not the main contributor to these environmental influences, unless we deliberately expose ourselves to ionizing radiation or smoke cigarettes. Our DNA does not change because of our thought processes as Dr Leaf advocates [3].

What does change more readily is the expression of those genes. Gene expression is the cell machinery reading the genes and making the proteins that the genes encode. The genes are expressed to make the proteins needed for the cell to maintain its function. Which genes are expressed is dependant on the cell’s stage of development and the environment it finds itself in. For example, when the body encounters a high level of dietary iron, a series of steps activates a gene to promote the production of ferritin, a protein that helps to carry iron in the blood stream [1: p375-6]. Gene expression isn’t solely dependent on our environment though, because an embryo is expressing genes like crazy in order to make the proteins to build a human being, but the gene expression in an embryo is largely following a pre-determined time course, not the environment [4] (and certainly not because of responses to life’s experiences).

Like to read more about Dr Leaf’s teaching and how it compares to current science? Download the free eBook HOLD THAT THOUGHT, Reappraising The Work Of Dr Caroline Leaf