According to a new study by Rutgers University, “Learning new cognitive skills can help reduce overwhelming negative thoughts”. So said Dr Caroline Leaf, communication pathologist and self-titled cognitive neuroscientist. She also advised that “Intentionally bringing those rogue thoughts under control is essential to mind health! And learn something new every day – develop your mind!”

So … negative thoughts are what, like an evil spy organisation, running around causing wanton destruction, overwhelming your capacity to function?

If that’s the case, then new cognitive skills must be like Tom Cruise, running, jumping, shooting and kicking their way through the negative thoughts, saving the world and getting the girl.

It’s a popular concept. As I discussed in my previous post, the power of positive thinking is culturally sanctioned Western folk psychology. We implicitly accept the idea that we have to harness positive thoughts and stop negative thoughts if we’re to overcome life’s obstacles.

However, the only rogue notions here are Dr Leaf’s.

Dr Leaf’s post sounds authoritative and sciency, but is nothing else. It’s vague, and with a bit of deeper palpation, it’s actually wrong.

Dr Leaf has gone back to her bad habit of obfuscating her references, maybe because she’s getting lost in her own hubris, or more likely, it’s much easier for her audience to see that she’s just cut-and-pasted the opening by-line of a press release again if she actually disclosed her source.

In fact, the article is about a study from Rutgers which studied two behavioural interventions (not cognitive ones), a form of mindfulness meditation and aerobic exercise. The original publication is in the journal Translational Psychiatry [1], if you want to check it out for yourself. This article isn’t about learning cognitive skills at all. Exercise and mindfulness meditation are tried and true behavioural methods of improving mood disorders like depression, which the authors combined to assess the benefit or otherwise. Neither intervention involved challenging or fighting thoughts, or suppressing ‘negative’ thoughts, or “intentionally bringing those rogue thoughts under control”.

Indeed, the mindfulness meditation used involves “the practice of attending to the present moment and allowing thoughts and emotions to pass without judgment.” [1] Mindfulness doesn’t try to control anything.  Rather than supporting Dr Leaf’s declaration that intentionally bringing thoughts under control is essential to mind health, this study contradicts it.

Cutting and pasting doesn’t make you an expert. It’s easy to take a sciency-sounding tag line and put it in a pretty little graphic. Everyone does it. 90% of Instagram and Facebook posts these days are faux-authoritative pseudo-science memes that aren’t worth the bytes they’re made of.

Junk science is like junk food. If that’s all you consume, then you eventually become an intellectual blob of lard, stuffed full of mistruths and logical fallacies, and incapable of understanding scientific truth for yourself. Dr Leaf’s audience deserves better than junk science and it’s about time that Dr Leaf stopped pretending to be an expert, and started acting like one.

Mothers.  They are probably the single most important group of people in the world.

It’s not that I’m belittling the role of fatherhood, or demeaning the amazing work that fathers do for their children, but simply put, we wouldn’t be here if it wasn’t for the tireless patience and sacrifice of our mums.  Nine months of nausea, sore breasts, swollen appendages and having your organs used as punching bags.  Then there’s the trauma of birth itself, which is rewarded with the full-time care of a screaming, incessantly ravenous alimentary canal which has taken the form of a baby.  Over the years, the screaming and the pooping become slightly more manageable, but most mothers remain the head chef, playmate, laundromat, ironing lady, teacher, taxi-driver, nurse and drill sergeant for their offspring.

Despite these daily feats of amazement, most mothers are haunted by this nagging sense of not being good enough – Mother Guilt.  As author Mia Redrick wrote,

“Mother’s guilt is real. Nearly all of us experience it. We are racked with guilt, feeling that our best isn’t good enough. We struggle when work commitments prevent us from attending school events and we are crushed by the looks of disappointment on our children’s faces. We wonder if choices we have made, such as what school to send our kids to, have not had far-reaching negative consequences, if a different path would have resulted in happier, more well-adjusted kids. We moms might feel guilty when we can’t afford something for our kids or are nagged by the feeling that we simply don’t spend enough time with them.”

Mothers seems to feel guilty about anything, and everything, for the whole day …

“The kids are in the bed again. I was sure I shushed them back to their beds at 2am, they must have snuck in during the wee hours. Tonight I will make sure they sleep all night in their own beds. How will they ever learn to sleep if I keep letting them come in to my bed?”
“Whose children get only eight hours of sleep a night? I am sure at this age they are meant to be getting 12 – 14 hours sleep. I am going to damage then for life. Maybe I should let them sleep in my bed so they get more sleep?”
“Oh so much sugar in EVERYTHING.  Don’t you read the articles? Don’t you hear the “experts”? Don’t you see those diagrams with spoonful upon spoonful of the deadly substance displayed, a visual representation of poison imprinted on your mind each and every time you take the bran flakes from the cupboard?”

And so it goes on. 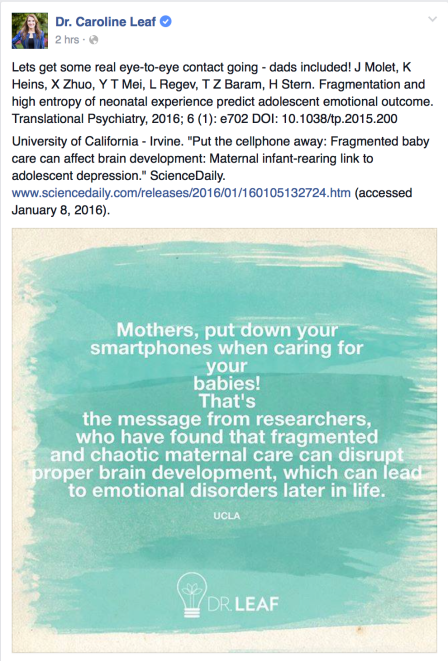 “Mothers, put down your smartphones when caring for your babies! That’s the message from researchers, who have found that fragmented and chaotic maternal care can disrupt proper brain development, which can lead to emotional disorders later in life.”

She then exhorted her followers, “Lets get some real eye-to-eye contact going – dads included!”

Dr Caroline Leaf is a communication pathologist and self-titled cognitive neuroscientist.  Credit where credit’s due – in the past, Dr Leaf has pathologically avoided citing her references, but today, she cited the article itself and the news story that promoted it.

But again, like the meme she posted a couple of days ago about sadness making people sick, Dr Leaf has posted the opening paragraph of a promotional PR puff piece and made it sound like a scientific pronouncement.  When you actually read the journal article that the news story is promoting, it has nothing to do with smartphones.  Or indeed, human beings.

The research was performed entirely on rats.

The research itself, by Molet and colleagues [1], seemed entirely legitimate.  The rat pups raised in a more chaotic way appeared to have higher levels of anhedonia, because they didn’t engage as much in the things that rats normally find pleasurable, namely, drinking sugar water or playing with their rat buddies.

I’m not sure if you’ve ever seen a mother rat on a smartphone.  I certainly haven’t, which means that news article Dr Leaf took her meme from, the one published on Science Direct, made some pretty tenuous assumptions:

There’s no evidence from this study, or any work that I know of, that definitively proves any one of these things.  There are a number of alternative explanations as to why those rat pups weren’t as happy as the control group, but even if the chaotic nurturing of the rat babies was THE cause of their unhappiness, human beings are completely different to rats in cages.  And there are many things, other than smartphones, that can strain the mother-baby relationship.  Excessive mother guilt for one.

Dr Leaf’s meme is a good example of just how misinformation can spread quickly through the internet.  The PR department of a university writes a puff piece on the article to promote the university and its research.  But no one wants to read about depressed rats – they need a better hook.  There’s a love-hate relationship with smartphones in our culture, and lots of Mommy-guilt, so they use a sentence about smartphones and mothering to grab people’s attention, even though the journal article had nothing to do with either.

Science Direct then simply republished the press release from the university without filtering it, where it’s then picked up by wannabe scientists and self-titled experts like Dr Leaf, who pass on the misinformation to hundreds of thousands of their followers.  Pretty soon, mothers everywhere are feeling guilty about looking at their phone instead of their children’s eyes, when it probably doesn’t make a blime bit of difference.