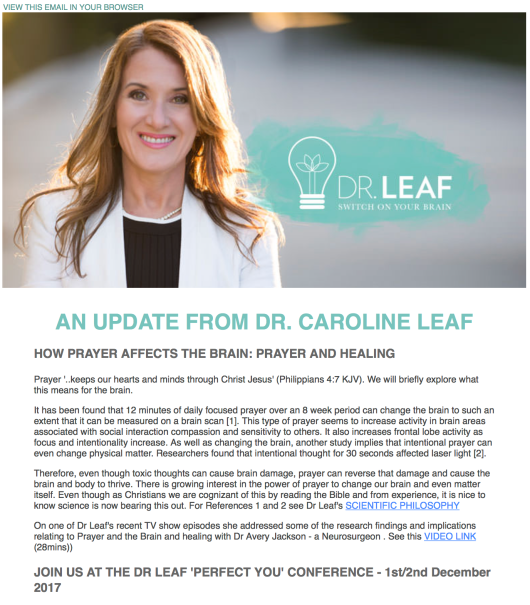 If you’re a Christian, then you believe in the power of prayer.  It’s pretty fundamental … prayer is fundamental to our relationship with God and our daily life with him, and even salvation itself.

One gets the impression from reading Dr Leaf’s e-mail newsletter today that the power of prayer is less about God and more about the power of the human mind.

Dr Leaf starts by saying that “12 minutes of daily focused prayer over an 8 week period can change the brain to such an extent that it can be measured on a brain scan. This type of prayer seems to increase activity in brain areas associated with social interaction compassion and sensitivity to others. It also increases frontal lobe activity as focus and intentionality increase.”

That may well be true, but the effect isn’t related to prayer itself, it’s simply what happens when the brain does things over and over.  This same effect occurs in people who perform Buddhist meditation [1], or jugglers learning to juggle [2], or London taxi drivers memorising the streets of London by rote [3].  Indeed, the brain has been shown to change simply with hormonal fluctuations that occur throughout the menstrual cycle [4].  Prayer might change the brain, but so do a lot of other things that have nothing to do with prayer.

Not that these pesky facts stop Dr Leaf from going on to state that, “As well as changing the brain, another study implies that intentional prayer can even change physical matter. Researchers found that intentional thought for 30 seconds affected laser light.”  To start with, this study [5] that Dr Leaf refers to was nothing to do with Christian prayer, and all to do with Buddhist-type meditation … to use this ‘experiment’ as support for prayer is misleading.  It’s also misleading because the results were essentially the interpretation of the experimenter.  The same experimental design performed by independent laboratories showed no effect of thought on laser light [6] (see also “Dr Caroline Leaf – Where Angels Fear To Tread“).