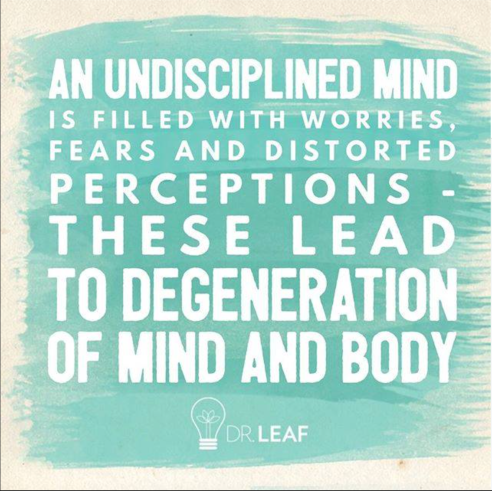 In Proverbs 12:25, the incredibly wise King Solomon wrote that, “Worry weighs us down; a cheerful word picks us up.”

Today, Dr Leaf posted to her social media stream that “An undisciplined mind is filled with worries, fears and distorted perceptions – These lead to degeneration of the mind and body.”

Well, that’s about as uplifting as a lead balloon.

Dr Caroline Leaf is a communication pathologist and a self-titled cognitive neuroscientist.  I’m sure her heart was in the right place when she posted her latest jewel of wisdom, but it may not be as encouraging or as helpful as she may have intended.

That’s because we’re meant to experience appropriate levels of fear and worry.  They’re a survival mechanism.  Without a certain amount of fear, we’d end up as a Darwin Award.  And as human beings, we’re naturally inclined to so many different cognitive biases that there’s a very long list (although ironically, those with the strongest confirmation bias will probably be the least likely to accept this).

By erroneously linking normal cognitive function to the concept of mental ill-discipline, Dr Leaf is simply setting people up for an unrealistic struggle with their normal psyche as they unnecessarily try to discipline it.

And for the people who really do struggle with excessive or inappropriate worry, fear or incorrect perceptions – i.e. people who suffer from formal anxiety disorders – this sort of statement is misleading because again, their issue isn’t mental ill-discipline. Anxiety is the result of a genetic predisposition and increased vulnerability to stress.

The second part of Dr Leafs meme is as unhelpful as the first.  For a start, it’s not true that worries, fears and distorted perceptions cause degeneration of the mind and body.  There may be a correlation between stress and some long term health problems, but correlation does not equal causation.  As Cohen and colleagues noted, “Although stressors are often associated with illness, the majority of individuals confronted with traumatic events and chronic serious problems remain disease-free.” [1]  Dr Leaf’s claim seems little more than a scare tactic, which can only lead to increased anxiety not increased motivation.

The important things to remember here are:
1. Experiencing worries, fears and distorted perceptions is normal, and not something that can be changed by disciplining your mind.  Don’t fall into the trap of trying to treat something that isn’t a disease.
2. If you do suffer from an anxiety disorder, don’t blame yourself.  That sets up a spiral of struggle.  Thoughts are just words. They have no power over you unless you engage with them.  Instead of trying to repress every worry and every fear, allow your thoughts to bubble away in the background, and instead, focus your energy on taking values based committed action which will ultimately help you live a life of meaning, not just struggling.