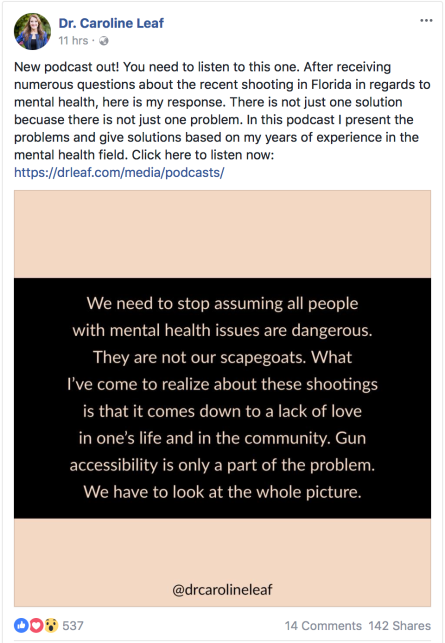 Dr Caroline Leaf is no stranger to ignorance and controversy – she thinks that our minds can create matter, that our thoughts can control our genetic expression, and that psychiatric medications are a leading cause of death. So it should come as no surprise when she proves the Dunning-Kruger Effect over and over again.

Still, I found her podcast and meme today utterly breathtaking.

Dr Leaf, communication pathologist and self-titled cognitive neuroscientist-cum-life-guru continues to weigh in on the gun debate every time there’s a mass shooting. I wouldn’t if I were her, but fools rush in.

At least Dr Leaf has finally stopped blaming mental illness or psychiatric medication for causing such mass murders. That said, there’s still more twisting and contorting in her statement than at a pretzel convention.

Dr Leaf has relinquished one over-simplistic solution in favour of another. Yes, mass shootings aren’t related to mental illness, but can you really say with a straight face that mass shootings occur because of a lack of love? So we should all hold hands and sing Kumbayah? Have a few more hugs? Dr Leaf’s suggestion is childish and inane.

Since 1996, Australia’s number of mass shootings has been zero. Australia’s gun-related homicide and suicide rate also fell. Why? It’s not because we all started loving each other more down here after 1996. It’s because, amongst other reasons, the Australian government introduced gun law reform, drastically reducing the number of guns available within the general population.

Perhaps living in Texas has rubbed off on her, or perhaps Dr Leaf is an NRA sympathiser. I honestly don’t know why Dr Leaf is so afraid to speak directly to the problem. Most of the US and the entire rest of the world can see the issue for what it is. If it wasn’t so tragic, her dance around the issue would be comical.

Dr Leaf is welcome to her opinion, but she can not claim any level of moral or professional authority on this issue. Her “years of experience in the mental health field” are zero, as is her credibility as an expert. Encouraging more love with the same number of handguns and semi-automatics on the street is not going to prevent more casualties.