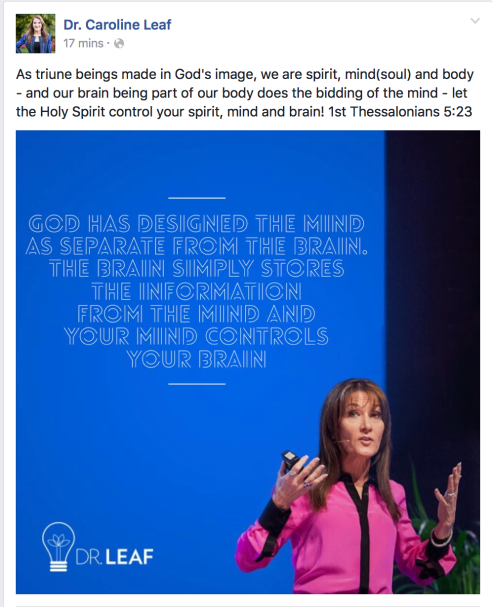 Dr Leaf has been promoting her food philosophy lately, but yesterday and today, she has come back to one of her favourite neuroscience topics.

Dr Caroline Leaf is a communication pathologist and a self-titled cognitive neuroscientist. It’s her belief that “as triune beings made in God’s image, we are spirit, mind(soul) and body – and our brain being part of the body does the bidding of the mind …”.

This is one of the flaws that terminally weakens her teaching, and leads to scientifically irrational statements like yesterday’s meme:

“God has designed the mind as seperate from the brain. The brain simply stores the information from the mind and your mind controls your brain.”

On what basis does she make such a claim? I’ve reviewed the scripture relating to the triune being hypothesis. The Bible doesn’t say that our mind is seperate to our brain, nor that it dominates and controls our brain. Dr Leaf’s statement yesterday is simply assumption based on more assumption. It’s like an intellectual house of cards. The slightest puff of scrutiny and the whole thing comes crashing down on itself. 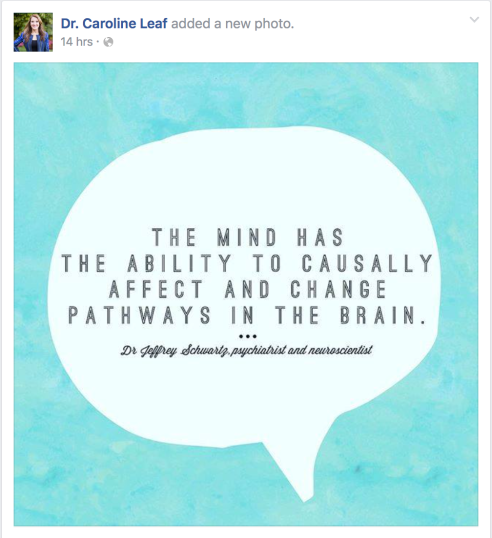 To try and reinforce her message today, Dr Leaf quoted Dr Jeffrey Schwartz, psychiatrist and neuroscientist, “The mind has the ability to causally affect and change pathways in the brain.” Jeffrey M. Schwartz is an OCD researcher from the UCLA School of Medicine. It appears he lets his Buddhist anti-materialism philosophy cloud his scientific judgement.

Well Dr Leaf, I see your expert and I raise you. Dr David Eagleman is an author and neuroscientist at Baylor College of Medicine in Texas. He has written more than 100 scientific papers on neuroscience, and has published numerous best-selling non-fiction books including ‘Incognito, The Secret Lives of the Brain’ which was a New York Times best-seller. He isn’t an irrational anti-materialist.

He said, “It is clear at this point that we are irrevocably tied to the 3 pounds of strange computational material found within our skulls. The brain is utterly alien to us, and yet our personalities, hopes, fears and aspirations all depend on the integrity of this biological tissue. How do we know this? Because when the brain changes, we change. Our personality, decision-making, risk-aversion, the capacity to see colours or name animals – all these can change, in very specific ways, when the brain is altered by tumours, strokes, drugs, disease or trauma. As much as we like to think about the body and mind living separate existences, the mental is not separable from the physical.” https://goo.gl/uFKF47

This statement makes much more logical sense. The functions of the mind are all vulnerable to changes in the brain. Take medications as one particular example. Caffeine makes us more alert, alcohol makes us sleepy or disinhibited. Marijuana makes it’s users relaxed and hungry, and sometimes paranoid. Pathological gambling, hypersexuality, and compulsive shopping together sound like a party weekend in Las Vegas, but they’re all side effects linked with Dopamine Agonist Drugs, which are used to treat Parkinson’s disease. There are many other examples of many other physical and chemical changes in the brain that affect the mind.

Conversely, there is limited evidence of the effect of the mind on the brain. Sure, there is some evidence of experienced meditators who have larger areas in their brain dedicated to what they meditate on, but the same effect has been shown in other parts of the brain unrelated to our conscious awareness.

But since the mind is a function of the brain, whatever effect the ‘mind’ has on the brain is, in reality, just the brain effecting itself.

So Dr Leaf can cherry-pick from her favourite authors all she wants, but quoting a supportive neuroscientist doesn’t diminish the crushing weight of scientific evidence which opposes her philosophical assumptions. If she wants to continue to proffer such statements, she would be better served to come up with some actual evidence, not just biased opinion.