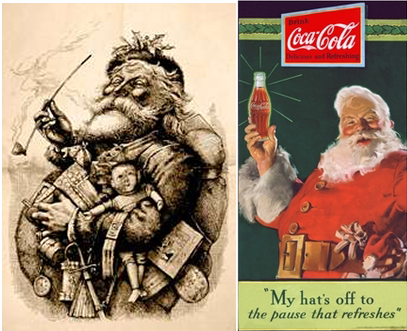 When you’re Santa Claus, kids will tell you anything.

When I was at University, I had a holiday job running children’s activities and games for parties, work functions and the like. One of the roles I got to do a few times was to don the Santa suit and ho-ho-ho for 20 minutes while asking all the kids what they wanted for Christmas. Though I found that some of the chattier kids weren’t just telling me that they wanted for Christmas, but what they did yesterday, and what they’re going to be when they grow up, and what mummy and daddy do at work, and where they live. Lucky my intentions weren’t nefarious! Quick tip – never tell children important information like credit card numbers if you don’t want the guy playing Santa to know as well.

Santa Claus is an enduring symbol of western Christmas celebrations, part of our modern cultural folklore. Santa is almost exclusively associated with joy – he’s kind, he brings gifts and he’s jolly with a deep belly laugh. He seeks goodness in people. As TV producer and Santa performer, Jonathan Meath said, “Santa is really the only cultural icon we have who’s male, does not carry a gun, and is all about peace, joy, giving, and caring for other people. That’s part of the magic for me, especially in a culture where we’ve become so commercialized and hooked into manufactured icons. Santa is much more organic, integral, connected to the past, and therefore connected to the future.”

So where did the notion of the modern Santa come from?

Modern cultural Santa, like most things in our modern world, was influenced by commercialisation. The modern image of Santa, a jolly fat man with a big white beard, in a red snow suit, comes from Coca Cola. In 1931, illustrator Haddon Sundblom created the image of Santa as we currently know him, and from 1931-1964, Sundblom created a new ad for Coke each year featuring the jolly old fat man.

Sundblom, in turn, took his inspiration for Santa Claus from the drawings of political cartoonist Thomas Nast. At the turn of the 20th century, several illustrators were drawing Santa Claus as a fat man with a beard, smoking a pipe. The inspiration for these pictures of Santa came from the work of Nast who between 1863 and 1883, published a drawing of Santa Claus every year in the magazine Harpers Weekly. Nast’s most popular, and most recognised rendition of Santa was published in early 1881.

Nast himself drew inspiration for his depictions of Santa Claus from the stories and traditions that preceded him in the early 1800’s, specifically the very famous poem, “A visit from St Nicholas”, or what is also known as “T’was the night before Christmas”. This poem was published in 1823. Around this time in history, writers and illustrators had begun to rediscover some of the old stories and were using them to tell stories about the gift-givers of Christmas.

Prior to the 1800’s, traditions of gift-giving were still very strong but in early 16th century Europe after the protestant reformation, the old stories and traditions became unpopular. So in the UK, particularly in England, he became ‘Father Christmas’ from stories plays during the middle ages in the UK and parts of northern Europe. In parts of Austria and Germany, the present giver became the ‘Christkind’ a golden-haired baby, with wings, who symbolizes the new born baby Jesus. In the early USA his name was ‘Kris Kringle’ (from the Christkind).

Dutch settlers to the USA took their tradition of ’Sinterklaas’ with them, and over time, Kris Kringle and Father Christmas became intertwined with Sinterklaas, which morphed to ‘Santa Claus’.

In turn, the origins of Sinterklaas, Father Christmas and Kris Kringle was St Nicholas.

So who was St Nicholas exactly? What’s known about St Nicholas was that he was born during the third century in the village of Patara, in Asia Minor (currently, modern Turkey). His parents raised him as a devout Christian but died when he was a child. His parents left him a significant inheritance, but instead of spending it on himself, Nicholas used his whole inheritance to assist the needy, the sick, and the suffering. He dedicated his life to serving God and was made Bishop of Myra while still a young man. Bishop Nicholas became known throughout the land for his generosity to those in need. Under the Roman Emperor Diocletian, Bishop Nicholas suffered for his faith, was exiled and imprisoned. He died on the 6th of December AD 343.

There were many stories that make up the legend of St Nicholas, and certain miracles that were ascribed to him, which help explain the origins of the modern character of St Nicholas.

One story tells of a poor man with three daughters. The man was so poor, he could not pay a dowry so that his daughters, meaning that rather than get married, they would be sold into slavery. But on three different occasions, a bag of gold mysteriously appeared in their home – providing the needed dowries. The bags of gold were said to have been tossed through an open window to have landed in stockings or shoes left before the fire to dry, hence the custom of children hanging stockings or putting out shoes in readiness for gifts from Saint Nicholas.

Several stories tell of Nicholas and the sea. It is said that when he was young, Nicholas made a pilgrimage to the Holy Land. There as he walked where Jesus walked, he sought to more deeply experience Jesus’ life, passion, and resurrection. Returning by sea, a storm arose which threatened to wreck the ship. Nicholas calmly prayed, and the wind and waves suddenly calmed, sparing them all.

There’s a lot that we can learn from the original St Nicholas. He lived a life and taught others of the value of giving, of connection, of selfless kindness. In turn, all of these acts brought joy to those around him.

Christmas can also be a time for joy, not just for us, but for those around us, if we too can follow the lead of St Nicholas – being selfless, being kind, being generous, connecting with others.