The night is darkest just before the dawn, so says the age-old phrase.  It’s funny how we just accept these old adages as true, but when you actually think about it, they’re nothing more than a concoction of the imagination.  The night isn’t darker just before dawn – it’s just as dark when the sun goes down as it is before the sun comes up again.

In the same way, we so often accept things said by ‘experts’ as truth when in reality, they’re also just some particularly imaginative concoctions.

Take, for example, Dr Leaf’s latest e-mail newsletter and blog for June 2017.  In it, she merrily gloated about how a recent UN Human Rights report “exposed the current failings of diseased-based psychiatry” and “challenges the dominant narrative of brain disease and its overreliance on psychoactive drugs”.  The smugness is palpable – she finally has something more authoritative to try and back up her psychiatric antagonism than just the collective ranting of an outspoken, ill-informed fringe group.

Dr Leaf is a communication pathologist (essentially an academic speech pathologist) though she continues to delusionally claim that she’s a cognitive neuroscientist.  She also grandiosely believes her training in speech pathology make her a mental health expert, above psychiatrists with actual medical training and decades of real clinical experience.  She might feel vindicated by this report and her ill-formed friends, but her view is naive and her narrative is based on inaccurate statistics and logical fallacy.

For example, this paragraph encapsulates Dr Leaf’s statistical errancy and general self-deception: “Several of my previous blogs, as well as some of my FAQs, deal with the current state of mental health care, which has crippled so many lives, led to countless deaths, and left millions of people thinking that there is ‘something wrong with my brain.’ Indeed, an estimated 20% of the American population take psychiatric drugs, which amounts to a staggering cost of $40 billion, as mental health advocate Robert Whitaker points out (a 50-fold increase since the late 1980s).”

It’s a “see-I-told-you-so” attempted justification, except that modern mental health care has not “crippled so many lives” or “led to countless deaths.”  It’s actually untreated mental illness which really cripples people’s lives, or ends them.  Suicide is an unspoken epidemic that is so often the end result of undiagnosed or untreated mental illness.  Suicide is the major cause of premature death among people with a mental illness and it’s estimated that up to one in ten people affected by mental illness die by suicide.  Up to 87% of people who die by suicide suffer from mental illnesses. There are more deaths by suicide than deaths caused by skin cancer and car accidents.  Up to three percent of adults have attempted suicide within their lifetime and it’s estimated that for every completed suicide, at least six other people are directly impacted in a significant way [1].

On the flip side, the use of any anti-psychotic medication for a patient with schizophrenia decreased their mortality by nearly 20% [2]. In another study, the mortality of those with schizophrenia who did not take anti-psychotics was nearly ten times that of the healthy population, but taking anti-psychotic medication reduced that by a factor of five! [3]  Dr Correll and colleagues summarised the literature, noting that, “clozapine, antidepressants, and lithium, as well as antiepileptics, are associated with reduced mortality from suicide. Thus, the potential risks of antipsychotics, antidepressants and mood stabilizers need to be weighed against the risk of the psychiatric disorders for which they are used and the lasting potential benefits that these medications can produce.” [4]

As for her example taken from the equally prejudiced Robert Whitaker that “an estimated 20% of the American population take psychiatric drugs, which amounts to a staggering cost of $40 billion … (a 50-fold increase since the late 1980s)”, even if it were true, it’s simply misleading and ill-informed.  Twenty percent of the US population might be taking “psychiatric drugs” but some of them might be taking them for different reasons.  For example, tricyclic anti-depressants are no longer used primarily for depression but have found a niche in the treatment of chronic and nerve-related pain.  And so what if there’s been a 50-fold increase in the use of psychiatric medications since the 1980’s, that doesn’t mean they’re being used inappropriately.  Her analogy is like saying that because there has been a 900-fold increase in the number of road deaths since the turn of the century [5], cars are being used inappropriately and we should all start travelling by horse-back again.

It’s the height of arrogance for Dr Leaf to sit in her ivory tower and condemn modern psychiatry based on her utopian fantasy, but mental illness affects real people and causes real suffering – like the two heart-broken parents told a Parliamentary Enquiry in Australia a few years back, “We would rather have our daughter alive with some of her rights set aside than dead with her rights (uselessly) preserved intact.” [6]

Dr Leaf may smugly think the sun is shining on her, but she’s still in the darkness of night, barking and howling at the moon like a rabid dog.  If she really wants to step into the light, she should try looking at the mountain of scientific evidence supporting modern psychiatry and if that’s not enough for her, then she should at least look at all those afflicted and distressed because the mental illness they or their loved one suffered from was ignored in favour of an ideology that claims to support human rights but which ignores the most basic human right of all, the right to life. 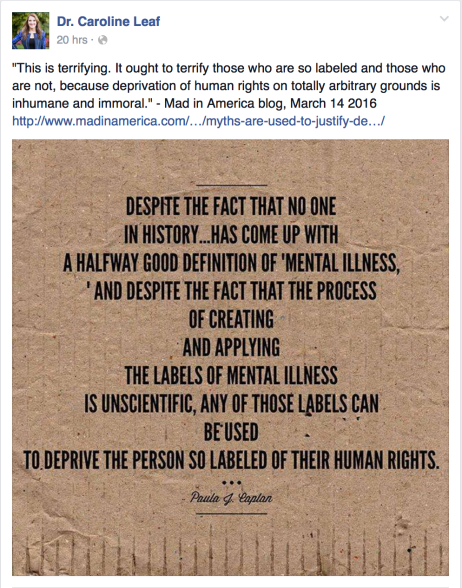 Let me tell you a story.

A couple of years ago, one of my patients was an elderly gentleman in his late seventies.  He was living in a nursing home at the time, but because of his history of psychosis, he remained on a treatment order – a requirement by law that if he was to remain outside of a mental facility, he had to have regular anti-psychotic medication every few weeks.

This man was on a treatment order because his disease caused him to have delusions.  He misinterpreted what was going on around him, and would not consider that he could be wrong.  In his particular case, he was convinced that his next-door neighbour was a paedophile, and he was planning to ambush his neighbour and castrate him.  Luckily the police had taken my patient into custody before he got the opportunity.  With treatment, my patient had clear thoughts, although needed close supervision.  Without his medication, he became confused and violent.

According to a post on the blog Mad in America and promoted by Dr Caroline Leaf, my patient’s diagnosis was spurious, and he was denied his basic human rights by being forced to take medications.

Dr Caroline Leaf is a communication pathologist and self-titled cognitive neuroscientist.  She is also a self-declared expert in mental health, despite not having any professional training in medicine, psychiatry, psychology or even cognitive neuroscience for that matter.

Indeed, if she had any experience or expertise in mental health, she would have recognised the basic factual errors and logical fallacies that riddled the post she quoted from.

Take the quote that Dr Leaf posted on social media.  The full quote from the Mad in America post is:

“Despite the fact that no one in history, not even the omnipotent American Psychiatric Association – which produces and profits mightily from the ‘Bible’ of mental disorders — has come up with a halfway good definition of “mental illness,” and despite the fact that the process of creating and applying the labels of mental illness is unscientific, any of those labels can be used to deprive the person so labeled of their human rights. This is terrifying. It ought to terrify those who are so labeled and those who are not, because deprivation of human rights on totally arbitrary grounds is inhumane and immoral.”

This is the same tired, emotionally laden and misleading rhetoric that’s so often barked in fervent paroxysms through the foaming lips of those opposed to modern psychiatric practice:

Caplan claims just don’t stand up to any rational scrutiny.

If you want to find a group that really are suffering from inhumane and immoral deprivations of their human rights, then that would be Christians.  Around the globe, millions of Christians are oppressed, imprisoned, tortured, raped, and murdered every year.

Time and space preclude a full analysis of Caplan’s post, but what’s really important is that both the American Psychiatric Association and the U.S. Department of Health and Human Services’s Office of Civil Rights, an independent ombudsman, dismissed formal appeals by Caplan relating to her hysterical claims of inhumane forced psychiatric treatment.  Dr Leaf conveniently left that out of her social media post.

Instead, Dr Leaf chose to publish one of the most alarming quotes from an article heavy on scaremongering, from a disaffected author on an extremist blog.  If Dr Leaf was a real expert on mental health instead of being a self-declared one, she would have easily seen how nonsensical Caplan’s post was.

By posting this quote on social media today, it’s highly likely that Dr Leaf has caused harm to thousands of vulnerable Christians by unnecessarily increasing the stigma and fear of a mental health diagnosis.  This, in turn, is likely to lead to these same vulnerable Christians missing out on (drug and non-drug) treatment which would help them rise to their true potential in God and in life, leaving them trapped and suffering in their mental destitution.