In every day life, if someone started talking in strings of indecipherable, chaotic syllables, you’d be giving them quite a lot of space, concerned about how much methamphetamine they’d been using.

In the average charismatic church, it’s just another service (the speaking in tongues, not the meth).

I’ve grown up in Pentecostal churches, and was baptised in the Holy Spirit when I was a child, so I forget how freaky it is for those who’ve never seen a whole church start talking or singing in tongues. For the uninitiated, the Bible talks about speaking in other tongues, which is a “New Testament phenomena where a person speaks in a language that is unknown to him. This language is either the language of angels or other earthly languages (1 Cor. 13:1). It occurred in Acts 2 at Pentecost and also in the Corinthian church as is described in 1 Corinthians 14. This New Testament gift was given by the Holy Spirit to the Christian church and is for the purpose of the edification of the Body of Christ as well as for glorifying the Lord.” (http://carm.org/speaking-in-tongues)

In scientific terms, speaking in tongues is referred to as “Glossolalia”, from the Greek, ‘glosso-‘ ~ ‘the tongue’ and ‘-lalia’ ~ ‘to speak, to chat’. Scientists who initially studied it in the 60’s and 70’s drew the conclusion that glossolalia was related to psychopathology (that people who spoke in tongues were crazy) [1, 2], and in later decades, it was thought to be caused by a form of temporal lobe epilepsy [3].

Earlier today, Dr Caroline Leaf, a communication pathologist and self-titled cognitive neuroscientist, declared that, “When we speak in tongues, research shows that the areas involved in discernment in the brain increase in activity, which means we increase in wisdom.”

I was fascinated to find this research for myself. Dr Leaf never references her social media memes, so I started looking through the medical literature on the subject from respected databases like PubMed, and search engines like Google Scholar.

Despite a thorough search, I was only able to find one article that studied the pattern of brain activity during speaking in tongues. The article, “The measurement of regional cerebral blood flow during glossolalia: A preliminary SPECT study” [4] took five healthy women, psychiatrically stable, long term members of their churches, who had all spoken in tongues for many years. They scanned their brain activity after a period of singing to gospel songs in English and compared it to their brain activity after the same amount of time praying in tongues (while listening to the same music as before).

What they found was that the brain was more active in the left superior parietal lobe, while there was a decrease in brain activity in the prefrontal cortices, left caudate nucleus and left temporal pole. There was a trend for an increase in the activity of the right amygdala, but this may have just been chance.

So are any of those brain regions responsible for discernment as Dr Leaf suggested?

Well, that all depends on how you define “discernment”. “Discernment” is not really a common neurobiological term. The standard term in the literature is “judgement”. The brain regions that are associated with evaluation and judgement are the amygdala and ventral portions of the striatum as well as the ventromedial prefrontal cortex (vmPFC), orbitofrontal cortex (OFC), the insula, the dorsal anterior cingulate cortex (dACC), and the periaqueductal gray (PAG) [5].

Are there any parts of the brain that match in the two lists? Only one – the ventromedial prefrontal cortex, or vmPFC for short. The prefrontal cortex is important in reasoning and decision-making, especially if there is uncertainty or novelty, while the vmPFC in particular is involved in the use of goal-relevant information in guiding responses, e.g., assigning value to choice options [6].

According to Dr Leaf, “When we speak in tongues, research shows that the areas involved in discernment in the brain increase in activity”. But that’s certainly not what the research paper said. The actual research is entirely the opposite.

Again, there are really only two reasonable explanations as to why the research contradicts Dr Leaf; either there is another piece of research which supports Dr Leaf’s assertion, or Dr Leaf is simply wrong.

At the risk of repeating myself, Dr Leaf needs to quote her sources when she is writing her little social media memes. Her meme may be perfectly justified by robust scientific evidence, but if she isn’t willing to share her sources, we’ll never know, and the only conclusion remaining is that Dr Leaf can’t interpret simple research.

So as it stands, there really isn’t any evidence that speaking in tongues makes you more discerning. By trying to claim otherwise, Dr Leaf further undermines her own reputation and credibility as an expert. 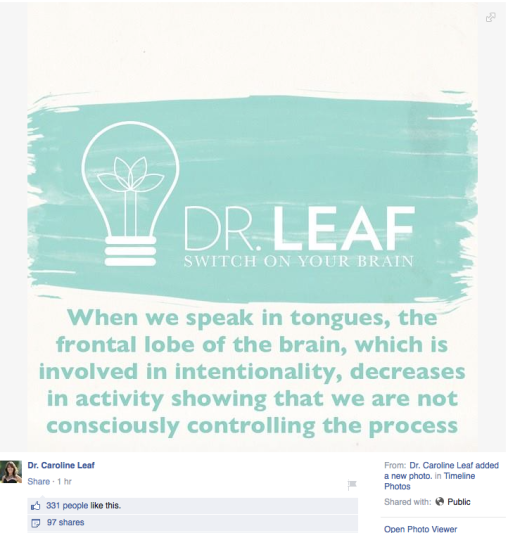 So, I can’t find fault on what Dr Leaf said here.  It fits with the paper I quoted from Newberg et al (2006).  Still, it begs the question of why Dr Leaf couldn’t have said this in the first place, and why she still isn’t willing to share her citations?

It also raises the other obvious question, why is it important to know what our brain does in glossolalia?  It’s only a study of 5 patients, and I’m sure that not all episodes of speaking in tongues is associated with decreased intentionality.  The research, being so small, isn’t a true reflection of the practice of speaking in tongues.  Lets hope that the future will bring more funding to better study this central tenet to the charismatic faith.