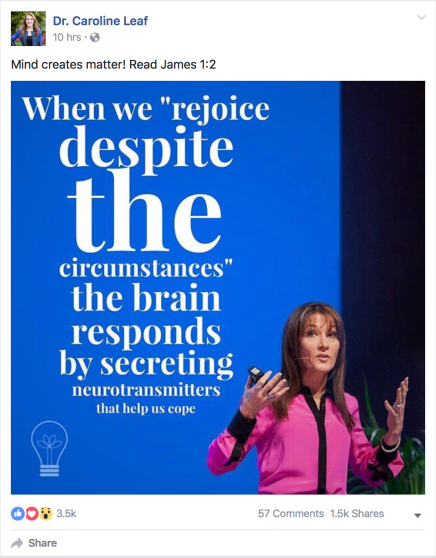 Dr Caroline Leaf, communication pathologist and self-titled cognitive neuroscientist, broke the most fundamental rules of both science and Christian teaching in her social media post today.

Dr Leaf’s statement not only violates the laws of physics, but it also contradicts the Bible by elevating the human mind to the level of God himself.

So much for being a scientific and Biblical expert.  In just three little words, Dr Leaf manages to violate the most basic principles of science and Christianity.

To add salt to the wound, Dr Leaf tries to justify her unscientific heresy by referencing James 1:2, as if tagging a scripture will somehow vindicate her.  Except James 1:2 says, “My brethren, count it all joy when you fall into various trials”.  Well, that’s awkward … James 1:2 has nothing to do with matter or the mind.

Her meme is just as irrelevant and unscientific.

“When we ‘rejoice despite the circumstances’, the brain responds by secreting neurotransitters that help us cope.”

There would many in Dr Leaf’s camp that would try and defend her statement by claiming that it was a poor choice of words perhaps, or that it was meant to be taken metaphorically not literally.  Sure, if that’s how you want to continue to delude yourself, then be my guest, but really there isn’t much wriggle room here.  How else can you interpret the words ‘create’ and ‘matter’?  You can’t really misrepresent it as matters of fact, or matters of law, or a state of affairs.  Dr Leaf meant it as the mass noun form of the word, “physical substance in general, as distinct from mind and spirit; (in physics) that which occupies space and possesses rest mass”.  And the word ‘create’ … we all know the meaning of that word, “to bring (something) into existence”.  It wouldn’t make any sense to say that the mind causes matter to happen as a result of one’s actions, or that the mind invests matter with a title of nobility.  It might be common to metaphorically say, “mind over matter” but there’s no metaphorical meaning for “mind creates matter”.

And so with just three little words, Dr Leaf contradicts the most basic of all principles of science and Christianity, and aptly demonstrates the irreconcilable deviation of her teaching from reality.  She has shown how willing she is to take an irrelevant scripture and try to use it to justify a misguided pseudoscientific proclamation.  Today’s meme calls her claim as a Biblical and scientific expert into serious question.

11 thoughts on “Dr Caroline Leaf and those three little words”